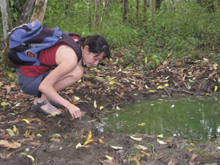 Obituary
Jenni Malie Higashiguchi, a doctoral student in biology at the University of Missouri-St. Louis, was born in Hawaii on March 24, 1981, and passed away on April 4 after a brief but catastrophic illness.


She joined the PhD program in Evolution, Ecology, and Systematics in the Department of Biology at the University of Missouri-St. Louis in 2007 to work with Patricia Parker, the E. Desmond Lee Endowed Professor of Zoological Studies. Working with Parker's group she applied what was learned in Hawaii in order to help Galapagos birds escape the same sad fate.


She had identified the study of the mosquito vectors of bird diseases as a critical piece of the puzzle that she would solve, and one that would contribute importantly to the goal of preventing extinctions of Galapagos birds.


She was in her third Galapagos field season, and second on this project, when she fell ill. Parker said the mosquitoes Jenni caught before her illness may provide the understanding that will help preserve the birds in one of nature's most famous wild places.

Jenni was brought to Miami for treatment, and then to Cleveland, where she passed away. She did not have any infectious diseases, but died of acute liver failure of unknown cause.

"Jenni Malie Higashiguchi was a gentle and caring person who would make beautiful leis for her student colleagues in celebration of each of their successes and bring delectable homemade sushi to any gathering," said Parker. "She always preferred talking in person to email or phone and we will forever continue to see her face peeking around our doors. Her contributions to UMSL and to Galapagos have been enormous."


She is survived by her parents, Owen and Carol Higashiguchi of Makawao, Hawaii. She is also survived by all of the members of the UMSL biology community who regard her as part of their own family.

I didn't know Jenni very well, but I was aquainted with her.  That's what often happens when fresh new students start a program and a few slackers seasoned students are still around.  She was a sweet and quiet girl (but who isn't quiet compared to me?).  I interacted with her occassionally at seminars, defense celebrations, and major department programs.  Her sudden illness and death is certainly a reminder of our mortality.  It also gives me pause because it could have happened to any one -- me, you, and countless of friends who spend weeks on end at sea, in the jungle, out in the desert or some other far off somewhat isolated place. During the field season, we can really become focused on getting as much data as we can because the window of opportunity is so slim.  But remember to take care of yourself; and be sure to give all of your family and friends a big kiss and hug before you set off on your journeys.